Shitennoji University, also known as International Buddhist University (IBU), aims to develop globally-minded individuals who can take on new challenges and achieve their goals by engaging with people in society.

The educational objectives of the university preserve the Buddhist spirit that Prince Shotoku instilled when founding Shitennoji Temple’s Kyoden-in, the institution that marked the origins of IBU. Prince Shotoku assumed the post of regent to Empress Suiko when he was only 20 years old. He established the Seventeen-Article Constitution, which reflected the Buddhist spirit, as well as a meritocratic policy called the Twelve-Level Cap and Rank System. He also exhibited his global perspective by sending official delegations to China’s Sui Dynasty to pursue diplomatic relations on an equal footing. Advocating wa (harmony) as a common principle, he re-shaped politics, the economy, diplomacy, culture, and philosophy in Japan. 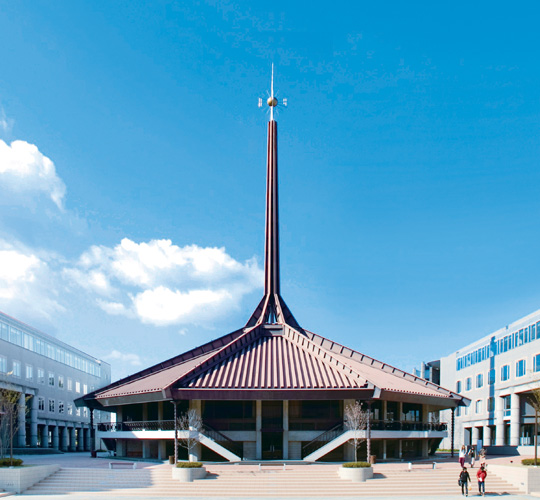 Upon its founding, Shitennoji Temple adopted a system of four institutions. Three of these institutions—Hiden-in, Ryobyo-in, and Seyaku-in—focused on social welfare and medicine, while a fourth, named Kyoden-in, was set up as an institute of research and learning.

Kyoden-in was Japan’s first recognized educational institution. It was founded as a place where students could build their character and achieve self-actualization by converting to Buddhism, doing no evil, and acting with benevolence toward others. The founding spirit of Kyoden-in, which can be traced back to Prince Shotoku, has been preserved right here at Shitennoji University.

Embodying the Ideals of Prince Shotoku

Students at IBU attend regular worship services. These solemn ceremonies play a vital role in enabling students to learn the teachings of Prince Shotoku—the founding principles of the university—while practicing a Buddhist mindset. Students’ regular exposure to these principles through Buddhist ceremonies helps them to develop a global perspective, think flexibly, and make sound judgments.

In this way, IBU provides an educational system that embodies the ideals of Prince Shotoku and that stimulates each student’s motivation to learn.
With a curriculum aimed at developing the spirit of wa (harmony), as well as wide-ranging education and specialized knowledge, IBU nurtures individuals who can contribute to global society through innovative perspectives and the ability to take action. 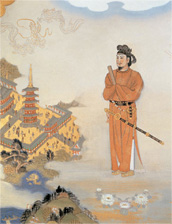 Prince Shotoku was a representative politician of the Asuka Period (538–710) and the first religious philosopher in Japan. Born as a son of Emperor Yomei and Princess Anahobe-no-hashihito, he was also known as Prince Umayato, Toyotomimi, and Joguo. Taking the office of regent to Empress Suiko in 593, he strived to establish Japan as a bureaucratic state like the great powers on the Korean Peninsula and the Asian Continent. In 603, he established the Twelve-Level Cap and Rank System, in which ranks of individual officers were decided based on their levels of ability instead of their families’ social standings. In 604, enacting the Seventeen-Article Constitution, he laid the foundation of a constitutional state administered by the bureaucracy. In 607, he sent a mission to China’s Sui Dynasty to deliver an official letter to Emperor Yang of Sui to restore diplomatic relations. He sent four delegations to Sui, focusing on introducing Buddhist culture to Japan from the continent. He also gave lectures on the Saddharma Pundarika Sutra, Srimala Sutra, and Vimalakirti Sutra, and he wrote annotated commentaries on them with the aim of establishing the foundations of a peaceful nation built on Mahayana Buddhism. He has been worshiped as the founder of Japanese Buddhism and the incarnation of Guze-kanzeon-bosatsu (the Goddess of Mercy).